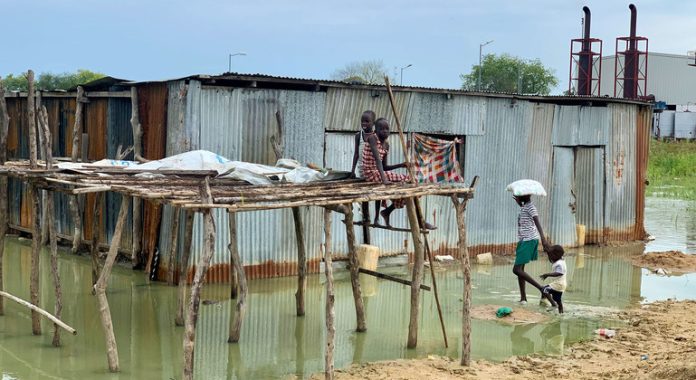 Weeks of heavy rain have caused unrelenting floods, affecting more than 700,000 people across the country, UNHCR Representative in the country Arafat Jamal said on Tuesday.

The rains have swept away homes and inundated farmlands, forcing families to seek safety on higher ground or in neighbouring towns.

“Women, children, and elderly people arrived exhausted and hungry,” he told journalists at the weekly UN humanitarian briefing in Geneva.

“Some had not eaten in days. Others are marooned on islands surrounded by water, sheltering under trees and unable to cross to safety. Women are deeply worried about the health of their children, with the increased risk of infections from deadly water-borne diseases.”

UNHCR and humanitarian partners are helping the South Sudanese authorities to deliver urgently needed support to the most affected people, including hygiene items, food, emergency shelter and solar lanterns to provide light.

The floods have primarily affected four States.  “In some areas, communities have not seen flooding to this extent since 1962,” said Mr. Jamal, who is also the interim UN Resident and Humanitarian Coordinator in the country.  Meanwhile, other areas have seen three years of consecutive flooding.

Mr. Jamal said although the effects of the climate emergency are being felt on every continent, and in every region, East Africa has been profoundly affected.

“Communities, already struggling, are facing unprecedented floods and storms, unreliable rainfall, and distress under hotter and drier conditions as their basic needs and rights to water, food, livelihoods, land, and a healthy environment are hit hard.”

His observations are in line with a report published on Tuesday by the World Meteorological Organization (WMO) and partners, which reveals how climate change contributed to mounting food insecurity, poverty and displacement in Africa during 2020.

With rains in South Sudan expected to continue for the remainder of the year, Mr. Jamal said the number of people needing humanitarian aid is also expected to increase.

Furthermore, climatic stresses can also provoke inter-communal conflict, he added.  Flooding and drought sometimes occur within the same year, forcing communities to seek and share refuge in ever-shrinking patches of higher ground, while also trying to make up for lost income.

“Dialogue between host and displaced communities who share resources will continue to be essential,” he advised.

Mr. Jamal pointed to an encouraging development, amidst the storm clouds, as the Government of South Sudan, one of the poorest nations in the world, has allocated $10 million to flood response efforts.

Local governments are also working to address suffering, through efforts such as building dikes and installing systems to pump out flood waters, he said, while communities and displaced people “also continue to show incredible resilience and generosity.”