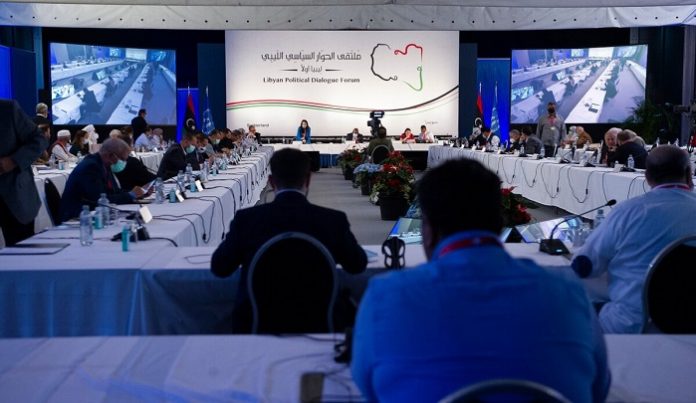 Geneva (UNA-OIC) – At the request of the Libyan Political Dialogue Forum (LPDF) members, the United Nations Support Mission in Libya (UNSMIL) facilitated a five-day in-person meeting of the LPDF in, Geneva, Switzerland from 28 June to 2 July 2021.

The meeting aimed at addressing issues that remained unresolved when the LPDF held a virtual meeting in May 2021 to consider a proposal by its Legal Committee for a constitutional basis for national elections on 24 December 2021.

From the onset of this process, UNSMIL was committed to giving the LPDF members, who have formed a Proposals-Bridging-Committee to find a common ground and try to bridge the various proposals, all the opportunities to reach a compromise, including extending the meeting for an extra day with the gracious and generous support of our host, the Swiss Government.

Despite all these opportunities, no consensus was reached among the LPDF members on a constitutional basis proposal, UNSMIL said in a statement published on its website on Saturday.

The Mission encouraged the LPDF members to continue to consult among themselves to pursue a workable compromise and cement what unites them. It added that it would continue to work with the LPDF members and the Proposals-Bridging-Committee to explore further efforts to build common ground based on the Legal Committee’s proposal which all recognize as the reference framework for a constitutional basis for elections.

In line with the LPDF Roadmap and the UN Security Council Resolution 2570 (2021), UNSMIL reiterates that proposals that do not make the elections feasible and possible to hold elections on 24 December will not be entertained, the statement noted.