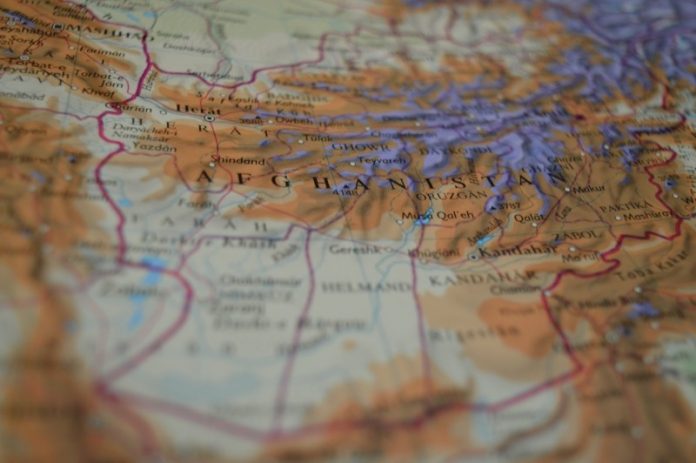 The latest confirmation of this came from former Afghan President Hamid Karzai on October 8. In an exclusive interview with Russia Today in London, when asked if he had suspicions that US bases were being used to aid the terrorist group, his response was forthright. Karzai said, “I have more than suspicions.”

He said he had heard reports, albeit unconfirmed, that the terrorist outfit was being supplied with helicopters. “How unmarked non-military colour helicopters supply these people, not only in one part of the country but in many regions,” said Karzai. “And this is a daily occurrence.” He went on to say that the terror group had spread its tentacles in the country right under the nose of US forces and the CIA.

Asked if he agreed with the assertion that the terror group was a US construct, Karzai replied, “Absolutely.”

Let us consider why the US has brought the terrorists into Afghanistan and why it is supporting them with weapons, transport, and other war materials. While the Washington warlords pursue several strategies simultaneously, a constant factor in all of them is the policy of creating perpetual chaos. This provides a pretext for a permanent presence in a targeted country or region. This is what is happening in Afghanistan.

The US has no intention of leaving Afghanistan if it can manage it to hang on. There are both geo-strategic and economic reasons behind this policy. It may be landlocked but Afghanistan sits at the crossroads of a number of countries that Washington either wants to undermine or control. And it has enormous mineral wealth that makes the Americans — and others — salivate at the prospect of getting their hands on such riches.

Behind the smokescreen of the war on terror, America is trying to sink its claws deeper into Afghanistan and the broader region. The US acts like a vulture; it wants to pick on its prey while preventing others from snatching it away.

The US’ geo-strategic and economic goals in Afghanistan are intertwined. Even a cursory glance at the country’s map would clarify this point. Containing China that lies to the north of Afghanistan by undermining its ambitious “One Belt, One Road” policy is a primary US target. This also explains Washington’s attempts to derail the China-Pakistan Economic Corridor (CPEC) by siding with India’s belligerent stance over the road that passes through Gilgit-Baltistan.

The Karakoram Highway has existed for more than 40 years but it is only recently that the US has started to sing from India’s hymnbook by claiming it goes through “disputed” territory. At the same time, Washington has not uttered a word over India’s egregious crimes against the Kashmiri people nor shown any inclination to resolve the seven-decades-long dispute over the state of Jammu and Kashmir.

Two other targets of US policy that it wants to achieve through Afghanistan are Iran and Russia in that order. Islamic Iran’s independent policy irks the Washington warlords. For nearly 40 years since the victory of the Islamic Revolution, the US has adopted belligerent policies to undermine the Islamic Republic. These have demonstrably failed but the Washington warlords have not given up. Instead, under Donald Trump, a certified lunatic, US hostility toward Iran has escalated alarmingly (this is equally true of US belligerence toward North Korea and Russia!).

Afghanistan is also being used as a springboard to keep Russia at bay through the “-stans” that were described during the Soviet era as its underbelly. Russia under Vladimir Putin has re-emerged on the world stage as a significant player. The US had undermined the Soviet Union partly through Afghanistan (the “Soviet’s Vietnam,” in the words of Zbigniew Brezezinski) and then robbed Russia during the Boris Yeltsin era. Yeltsin was a drunkard and a buffoon that the Americans manipulated to suck oxygen out of the Russian economy sending it into a depression that lasted for nearly eight years. The Russian GDP declined by 40% during the Yeltsin era.

Vladimir Putin was a senior official in the KGB at the time and witnessed these developments with alarm. A number of other Russian nationalists also chafed at how the US attempted to destroy Russia. They waited for the opportunity to reverse this trend that came when Yeltsin chose Putin as his successor.

As a cold and calculating man, Putin plans his moves carefully. He has methodically worked to re-establish Russia’s pre-eminence in the world. His involvement in Syria in September 2015 to shore up the government of President Bashar al-Asad was one such move. It contributed, together with Iran and Hizbullah to the defeat of US-Zionist-Saudi backed terrorists and preservation of the Syrian government.

America’s aggressive moves are not lost on the three major players: China, Iran, and Russia that have come much closer to each other. The fourth pillar of this group, Pakistan, has also inched closer to them although there is still lack of clarity among decision-makers about their relationship with the US. Pakistani politicians, addicted to US subservience, seem prepared for every insult that Washington hurls at them. Even in the face of Washington giving India a free hand in Afghanistan at the expense of Pakistan, the Islamabad crowd cannot muster enough courage to break loose of America’s deathly embrace.

We must also look at Afghanistan’s mineral wealth as well that acts as a strategic geopolitical magnet for predatory powers. Estimated at between $1 trillion to $3 trillion, first the Soviets and then the Americans were attracted to it. Again, both invaders mapped the country but the Americans have a firm idea about what lies beneath those hard rocks of the Hindukush Mountains.

There are major oil, natural gas and strategic raw material resources in Afghanistan. The mineral reserves include huge deposits of iron, copper, cobalt, gold, and lithium. An internal Pentagon memo dating back to 2007, quoted by the New York Times (“US Identifies Vast Mineral Riches in Afghanistan,” June 14, 2010) suggested that Afghanistan could become the “Saudi Arabia of lithium.”

Lithium, a strategic raw material, is used in most modern gadgets such as in high tech batteries for laptops, cell phones, and electric cars. With fossil fuel being phased out due to pollution, electric cars are the choice mode of transportation for the future. The Chinese have already announced they want to be global leaders in electric cars by 2025. They want one out of every fifth car on the road in China to be electric by then.

China may not have much of a choice. It can continue to rely on imported oil and have its cities smothered in smog — Beijing is one of the most polluted cities in the world — or move to clean energy sources. Lithium, found in abundance in Afghanistan, which can be used in making nuclear components, is also a major attraction for China.

Not surprisingly, Chinese companies have acquired rights to extract copper and coal. Beijing has also beaten the US for the first oil exploration concessions granted to foreigners in decades. And unlike the US, China does not need to station troops or have military bases in Afghanistan to reap the economic dividends.

For most Afghans, the US continues to live up to the epithet of the “Ugly American.”