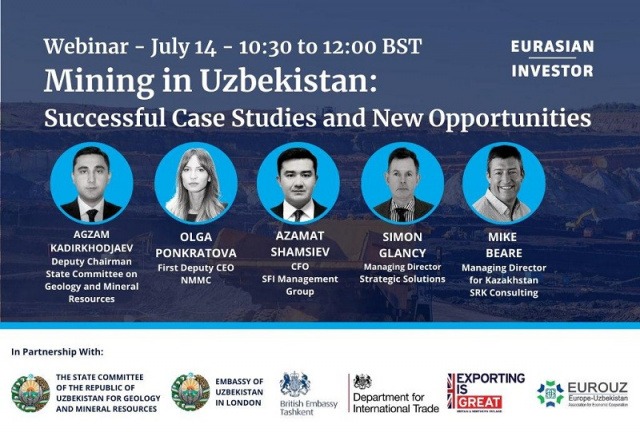 A webinar was held on development and investment potential of the mining industry of Uzbekistan, which was attended by the leadership of the State Committee on Geology and Mineral Resources of Uzbekistan and domestic enterprises of the industry, as well as about 200 businesspeople and experts, the UK media.

The event was organized by the Embassy of Uzbekistan in London, the UK Department for International Trade, the British Embassy in Tashkent, the British company Eurasian Investor with the support of the State Committee on Geology and Mineral Resources of the Republic of Uzbekistan.

At the event, a development strategy of the mineral resource base and the roadmap for the implementation of best international practices and standards developed by the State Committee on Geology and Mineral Resources and the Boston Consulting Group was presented. Successful Uzbekistan – British joint projects already carried out in this area were noted.

British experts welcomed the efforts of Uzbekistan on technological modernization of the industry, as well as the government’s decision to create the University of Geological Sciences, which is of key importance for training national highly qualified personnel.