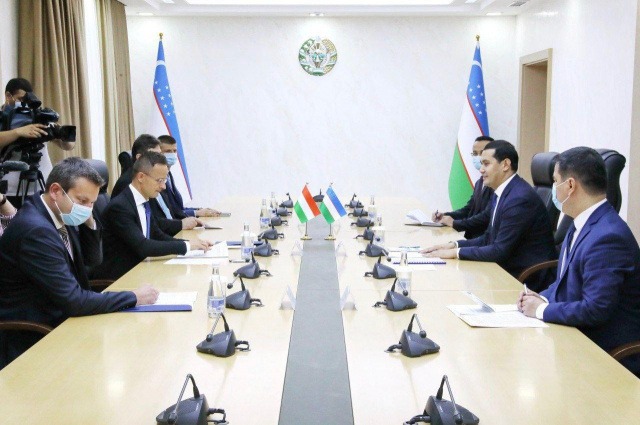 A delegation led by the Minister of Foreign Affairs and Trade of Hungary Péter Szijjártó, who arrived in Uzbekistan, met with the Deputy Prime Minister of the Republic of Uzbekistan, Minister of Investments and Foreign Trade Sardor Umurzakov.

It was noted that there is a huge potential for further expansion of trade, economic and investment cooperation, mechanisms for increasing the volume of bilateral trade were discussed.

A dialogue was held between representatives of the State Committee for Veterinary and Livestock Development of the Republic of Uzbekistan, Hungary’s Chamber of Agriculture, Food and Rural Development and Animal Breeders Association.

At the meeting, attention was paid to further expansion of friendly relations, in particular, to the contribution to the economic and social development of the two countries by strengthening cooperation in veterinary and animal husbandry, coordinating actions in this direction.

Following the talks, the parties signed an agreement on cooperation in development of animal husbandry, covering many relevant issues.

The agenda of the visit of the Hungarian delegation to Uzbekistan also provides for development of relations in cultural-humanitarian sphere. During the meeting of the guests with the leadership of the Ministry of Higher and Secondary Special Education of the Republic of Uzbekistan, a special interest was shown in establishing cooperation between the leading higher education institutions of the two countries. A memorandum was signed providing for further expansion of cooperation in this direction.