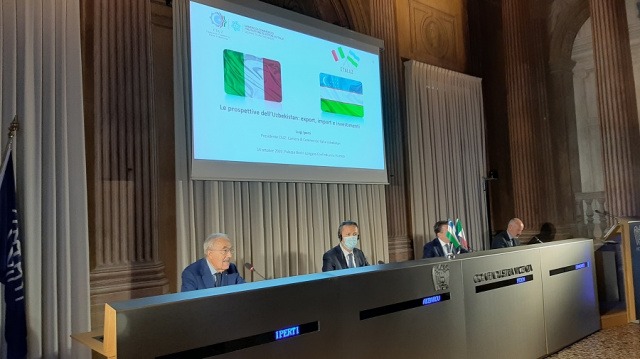 The event was organized jointly with Italy – Uzbekistan Chamber of Commerce, the “Confindustria” branch of the Confederation of Italian Industry and Intesa Sanpaolo Bank.

The Ambassador of Uzbekistan to Italy Otabek Akbarov made a report on the achievements of Uzbekistan under the leadership of President Shavkat Mirziyoyev over the past 4 years, the current priorities of the socio-political and socio-economic development of the country, the favorable investment climate created, as well as the main foreign policy initiatives at the regional and global levels.

Participants of the event were familiarized with the state of relations between Uzbekistan and Italy in political, economic, cultural and humanitarian spheres, as well as cooperation with the regions of Lombardy, Veneto, Campania, Marche and Tuscany.

A number of sectors of Uzbekistan economy were presented, in which, taking into account the potential of Italy, the successful implementation of investment and export-oriented projects is possible. In particular, oil and gas, mining, metallurgical, chemical, agro-industrial and light industries, as well as transport, logistics and tourism can become the growth points.

President of Italy – Uzbekistan Chamber of Commerce, Luigi Iperti, made a presentation on Uzbekistan with an emphasis on its economic potential. He emphasized the high political stability, dynamic development of the country, the process of modernization of the entire economy, which are being promoted under the leadership of President Shavkat Mirziyoyev.