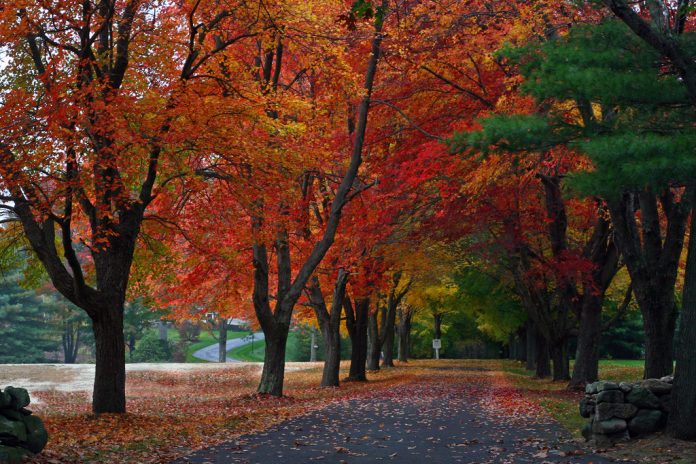 “By the rude bridge that arched the flood, their flag to April breeze unfurled. Here once the embattled farmers stood, and fired the shot heard round the world.”

My journey to historic New England, via a bus excursion, starting on September 17th, 2017, in Boston, Massachusetts. It was met by the most agreeable weather: plenty of sun with temperate climate conditions. The meetup point was the Hilton Logan Hotel, which is right next to the airport, with a splendid waterfront view of the City of Boston.

We were blessed with a guide who was a native son of the state with a deep knowledge of the areas we were going to visit. He also had a keen sense of humor, which always helps on an eight-day trip where you are sure to hit some bumps in the road, which we did. It comes with the territory.

Our first stop was downtown Boston and the Old North Church where Paul Revere began his legendary mission on April 18, 1775. As a result of Henry Wadsworth Longfellow’s poem about that memorable event, he gained everlasting fame. You know that line, don’t you? And doesn’t it still stir you? “Listen my children and you shall hear of the midnight ride of Paul Revere.”

We checked out the Old State House built in 1713. This is the site where five unarmed civilians were shot dead by British Redcoats. The lethal incident, March 5, 1770, became known as the “Boston Massacre.” It helped to fuel the Revolutionary War fever (1775-83).

Patriots, like Sam Adams, used it to keep the heat on the Brits and to build wider support for independence. He was a master at propaganda, an intellectual and one of the country’s founding fathers. Adams’ monument stands near Faneuil Hall.

Unlike Karl Marx, who spent most of his time in a library in London, Adams was a hands-on fighter-for freedom. Social justice activists would do well to learn from his achievements.

However, Boston is a city with a checkered past. It once cultivated widespread anti-Irish Catholic sentiments. “No Irish need apply” signs were rampant. The Irish got even with them. They elected one of their own – John Francis “Honey Fitz” Fitzgerald as Mayor from 1910 to 1913. Honey Fitz was JFK’s grandfather.

Although the season was supposed to be changing, the trees weren’t. The weather was still like late summer. We did see plenty of pumpkins but missed the glorious Fall foliage. Maybe, next time!

We then moved on to first the Lexington Green where the heroic “Minutemen” engaged in the initial, but minor skirmish of the great conflict. Next, we traveled to Concord to view the North Bridge and the monument to the fabled Minute Men who fought and died there. This site is considered by some the spiritual center of the New England’s resistance against the forces of the Crown.

Our tour moved on to Plymouth Rock. The Pilgrims landed there in 1620. A huge, 81 foot tall, national monument is found close by. It was completed in 1895, designed by Hammatt Billings, and is dedicated “to our forefathers.”

A stop at Hyannis followed. This is where the family of our martyred President John F. Kennedy vacationed for many years. His promising service to the nation was cut short by cowardly assassins in Dallas TX, on Nov. 22, 1963.

The numbers are growing daily who believe JFK (1917-63) was a victim of a sinister plot orchestrated by “Deep State” terrorists and not killed by the “patsy” – Lee Harvey Oswald. JFK’s death opened the way for the shadowy LBJ, and the Military Industrial Complex, to launch the Vietnam War debacle.

Our prime bump in the road came up fast. We couldn’t do the planned trip on the ferry to Martha’s Vineyard because the waters were just too rough. The remnants of those hurricanes that wreaked havoc in the Virgin Islands, Puerto Rico and Florida, just wouldn’t allow it to happen. Bummer!

Our bus then headed south to Newport, Rhode Island. While there, we visited some of the huge mansions that line the waterfront. They date from the so-called “Gilded Age.” The crown jewel of the homes is the 70-room, “The Breakers.” It was the summer “cottage” of Commodore Cornelius Vanderbilt. Yes, I said, “cottage.” Cheers to you, Commodore!

Newport, however, harbors a dark past. It was for a long time one of the slave-trading capitals of the country. Predatory merchants brought millions of black slaves to America in an evil business called, “The Triangle Trade.” It lasted into the early 19th century.

Mystic Seaport, Connecticut, came up right after Newport. It featured a “living museum” of 19th-century vessels, including the “Charles W. Morgan,” the last survivor of a New England-based whaling fleet.

We turned north to visit the Norman Rockwell Museum in Massachusetts. He is America’s most renowned painter and illustrator although dissed by nose-in-the-air purists. Rockwell’s painting of a young black girl, Ruby Bridges, flanked by white federal marshals is one of his most famous. My favorite is his painting of Baltimore Orioles’ Hall of Fame member, Brooks (“The Human Vacuum Cleaner”) Robinson.

Vermont was next on our agenda and the small hometown, Plymouth Notch, of President Calvin Coolidge, in office from 1923-1929. He was known as “Silent Cal,” an ultra-conservative. Coolidge broke the Boston “Police Strike of 1919.” He also rejected the Wilsonian globalist line that America should police the world and go broke while doing it.

To its credit, Vermont prohibited slavery in its state constitution. It joined the Union in 1791.

On the way to Maine, via New Hampshire, and the pretty town of Woodstock, we stopped at one of its wooden covered bridges. Along the way, we also checked out the Green and White Mountains of the two states and enjoyed our stay in the resort town of New Conway.

On the seventh day of our trip, we made it to Portland and Kennebunkport, Maine. The latter is where the George W. Bush clan hang out. I wonder if Dubya every sits out on his porch and ponders the disastrous mistake that his immoral Iraq War was? I doubt it. It was based on “fake evidence.” We know Dick “Darth Vader” Cheney, his VP, doesn’t give it a second thought.

Portland is a busy port city, which reminded me a lot of Baltimore and my days on its waterfront as longshoremen. Picturesque lighthouses are one this state’s main features.

It was privileged to witness a specular sunset on our last night in Maine before heading back to Boston the next day for my flight home. My trip was sponsored by Caravan tours. Our accommodations were all first-rate. I’ve traveled with them four other times to countries of Central America. I’m giving them my highest recommendation for this one.

You realize on this kind of journey into the past, that good coexisted with evil back then, just like it does today. Mercifully, in the past, the good prevailed and a new nation, a Republic, was born.

I suspect that there are many who might want to put this kind of experience, revisiting the noble struggle for independence, on their to-do list. I’m afraid some, however – probably those who need it the most – will take a knee on that one!

See more of my photos on my Facebook page.