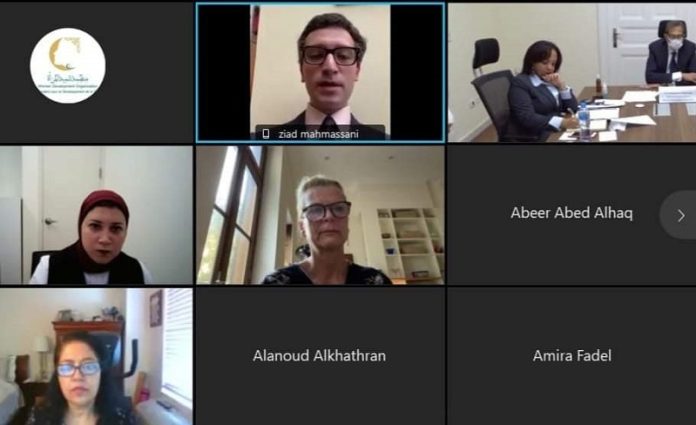 Cairo (UNA-OIC) – The Women Development Organization (WDO) held its first training workshop for the experts of its member states concerned with the file of women in the permanent missions to the United Nations in New York and capitals, under the title “The 76th session of the United Nations General Assembly with a special focus on the Third Committee”.

Deputy WDO Executive Director Ambassador Ihab Fawzy opened the workshop with a presentation on the Organization, its establishment and objectives, pointing to the negative effects of the COVID-19 pandemic on member states, especially on women and girls. Then he presented a summary of the WDO’s first strategic plan, which includes four areas that took into account dealing with these effects: women’s economic empowerment, eliminating violence against women, women’s leadership in promoting more peaceful and inclusive societies, and the role of women in fighting and preventing corruption.

Ms. Asa Regner, Deputy Executive Director of UN Women for Policies, Programs, Civil Society and Intergovernmental Support, gave a speech in which she tackled the various resolutions presented to the Third Committee this year related to women’s rights, in which she praised the active role that the WDO will play in its countries.

She added that UN Women played this expected role and sought from the outset to launch a strategic partnership with the Cairo-based WDO in order to achieve its goals.

Ziad Mahmasani, Head of the Secretariat of the Third Committee of the UN General Assembly, presented the Committee’s program of work, reports submitted before it, as well as resolutions, especially those related to women’s issues and how experts participated in the work of the Committee.

As part of the workshop focusing mainly on training experts on negotiation skills on various draft resolutions related to women’s issues within the framework of the Third Committee of the UN General Assembly, the second session included an interactive dialogue between keynote speakers and experts, and focused on previous negotiations on resolutions under the item on the advancement of women and other relevant decisions of the Third Committee and lessons learned from those negotiations.

In the third and final session, the focus was on providing practical training to the experts of the countries located in New York or in Capitals. The training was carried out by experts from the Third Committee from Egypt and Comoros, in addition to an independent expert in the field of women, in addition to the WDO.

This three-day workshop is the first of its kind that the WDO uniquely presents to its member states, within the framework of one of its main objectives, which is to build the capacities of member states in various fields related to women’s rights and to enhance their states’ participation in various international forums, the most important of which is the United Nations.