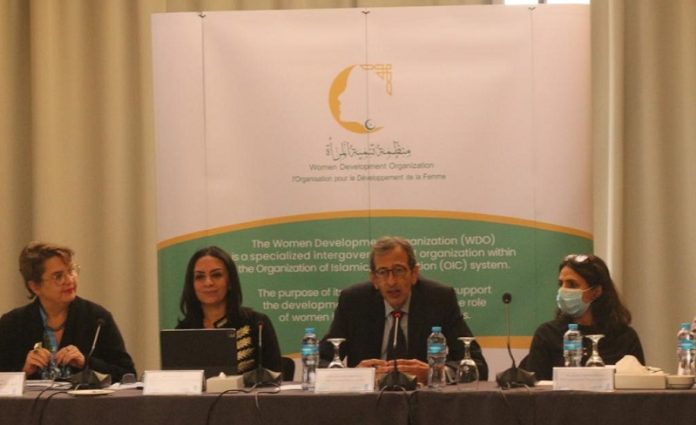 Cairo (UNA-OIC) – The Women Development Organization (WDO), in collaboration with UN Women, United Nations Office on Drugs and Crime (UNODC), and United Nations Development Program (UNDP), launched on Wednesday the first round of discussions on the establishment of a Multi-Partner Trust Fund (MPTF).

The event aimed at informing member states and development partners of the newly established WDO and engaging in an open exchange on thematic orientation and the Organization’s strategic priorities. It also explored ideas about the WDO MPTF and possibilities for funding opportunities within the proposed work streams of the Fund.

More than 30 official representatives from the international community in Cairo participated, including embassies, missions of OIC and non-OIC member states accredited to Egypt, as well as offices of development partners.

WDO Deputy Executive Director Ambassador Ehab Fawzy gave an informative presentation, emphasizing that the Organization will be the center of gender architecture of the OIC system. He outlined the first programmatic cycle of WDO and the linkage between its components and the MPTF’s four pillars, namely: Promoting Women’s Economic Empowerment & Financial Inclusion, Elimination of Violence and harmful practices against women and girls, Women’s leadership in promoting peaceful and inclusive societies, Role of women in fighting corruption.

President of the National Council for Women, Chair of the First WDO Ministerial Council Dr. Maya Morsy reaffirmed the importance of WDO and its establishment within the OIC system, as was the case with the establishment of UN Women within the UN system.

Ms. Morsy gave a background about the history of the establishment of WDO, which was launched in 2005, and the adoption of its Statute in 2010 and entering into force in 2020. She confirmed that Egypt spared no effort to support the Organization and its inception, adding that these efforts culminated with the decision of the Egyptian government to pay the annual share of the WDO budget for the least developed member states.

The second part of the meeting featured technical presentations on the four thematic pillars of WDO and the policy papers which were developed for them by UN Women, UNODC, and independent institutions such as Siracusa International Institute for Criminal Justice and Human Rights, in addition to the Islamic Development Bank (IsDB) that presented its perspective about cooperation with WDO.

The coordinator of the MPTF Office participated virtually from New York to explain the standard procedures of establishing MPTF and the different types of MPTFs.

The discussions on establishing an MPTF is one of the proposed modalities to advance strategic partnerships of WDO and integrate it within the international community in accordance with the objectives of its statute and its mandate underlined in OIC ministerial resolutions.