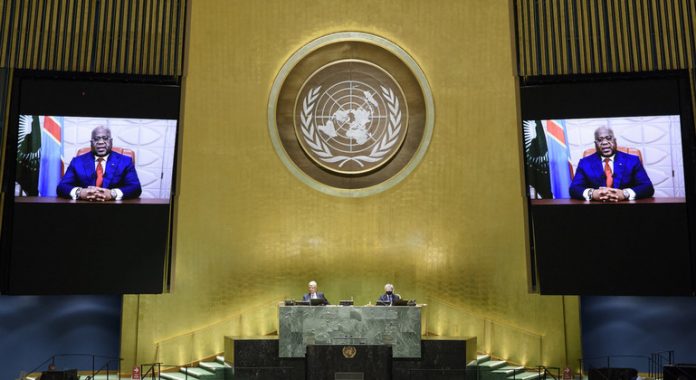 Addressing, via a pre-recorded video, President Félix Antoine Tshilombo Tshisekedi said that quick action by the Government brought down the mortality rate in the DRC from 10 per cent in the first days of the pandemic to 2.5 per cent today.

Acknowledging the role of the UN, including the World Health Organization (WHO), in responding to the coronavirus pandemic, President Tshisekedi urged greater support in the areas of capacity-building and technical assistance.

He also called for international efforts, including cancellation of debts and “no-strings-attached financing” to help developing countries recover from the pandemic and to build back better.

The President also informed the Assembly of his Government’s efforts to promote human rights, while acknowledging that much remains to be done to combat sexual and gender-based violence.

He also called for the Security Council to be reformed to make it more transparent, democratic and representative of the Organization’s make-up.

The President of the DRC also highlighted the threats posed by climate change.

The effects are increasingly visible throughout the world, he said, adding that climate action and building a green economy is “not merely a necessity, but an urgent duty.”

He underscored the DRC’s commitment to reduce carbon emissions and mitigate the effects of climate change, including through the preservation of its forests through a system of school gardens that aims to plant 1 billion trees in the coming years.

Expressing concern about the security situation in the east of the country, President Tshisekedi said that residual elements of armed groups continue to spread death and desolation, attacking not only civilians and national armed forces but also peacekeepers serving with the UN peacekeeping mission in the country, MONUSCO.

The funding of such groups through the illicit exploitation of natural resources which are then sold abroad must be neutralized through international sanctions, he urged.

Pending the outcome of the strategic review of MONUSCO, he said that the DRCs wants to see more cooperation on the ground between the UN mission and the national armed forces, particularly in those areas where armed groups are present.

“My determination is to put smiles on the faces of those living in the east of the country as soon as possible,” said President Tshisekedi.

Statement on the fifth meeting of the International Health Regulations (2005)...