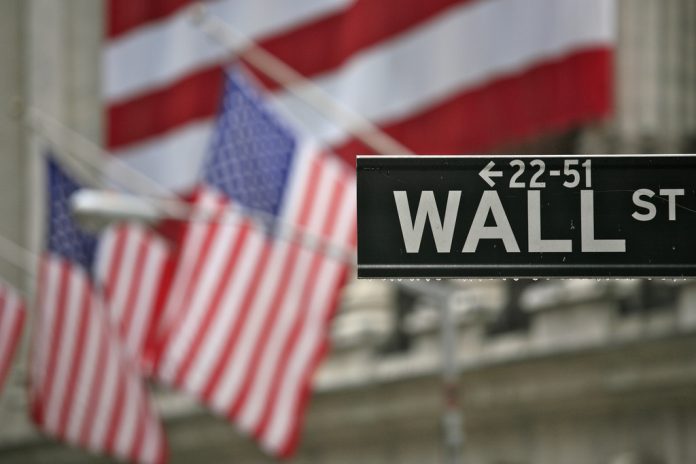 In the last couple of weeks, the Dow-Jones index bounced like a wild horse that’s out of control. It closed at 23,190 before closing on last Friday, Feb. 9.

What’s wrong with the Wall Street? Only a week ago the POTUS was boasting about how well the US economy had been performing since he was elected outdoing all previous records. Little did Trump realize that his boasting would burst on his own face so quickly, so badly and ‘bigly’! [As financial analysts would remind us the meteoric rise and devastating fall of the stock market had almost nothing to do with the POTUS.]

No one seems to know where the stock market is heading and why it took such a stomach-crunching nose-dive. According to Yousef Abbasi, global market strategist for JonesTrading, the U.S. stock market has lost a whopping $3.1 trillion since the Dow hit a record high of 26,616 on Jan. 26.

Some experts say that it was more like a necessary correction needed against an unsustainable growth that could not be explained away by the fundamentals. Others say that the topsy-turvy market was fueled by fear of inflation on the horizon, including whether rising wages and an increase in the number of jobs added to the economy will prompt the U.S. Federal Reserve to accelerate a rise in interest rates.

One of the catalysts for the recent selloff in the stock market was the report on Feb. 2 that average hourly earnings or wages had increased by 2.9% over the past year. This was the largest gain since the Great Recession, and it led to a lot of speculation that the Federal Reserve would have to raise interest rates a little more than expected this year to make sure that wages (and inflation) don’t go too high.

New York Federal Reserve President Bill Dudley called the stock market drop “small potatoes”. A rise in bond yields combined with a fall in stock prices is a market adjustment to stronger global economic growth and correlating expectations that the Federal Reserve will continue to raise interest rates, he said.

As noted by some experts, these days financial firms use computers programmed with complex sets of instructions known as algorithms. They identify trading opportunities and then strike faster than any human could.

Algorithmic trading has become so ubiquitous that some estimate well over half of all trading of the S&P 500 Index is done this way.

Such automated trading almost certainly accelerated the sell-off, which saw the Dow Jones Industrial Average crashing 800 points in ten minutes on Monday, Feb. 5. “The explosive speed of the fall … that is done by machines,” said Tom Stevenson, Investment Director at Fidelity Personal Investing.

Most analysts, according to BBC, believe the market tumble was prompted by a report on the US job market, released on Feb. 2, which showed strong wage growth. But the decision to sell on that news may have been made by robot traders.

US government bonds, or Treasuries, fell in value after the US jobs report. Yields (the interest that bonds offer investors) rise as prices fall. It’s thought that robot traders were waiting for that yield to hit 3% – a significant figure as it could prompt human investors to switch out of shares into bonds.

According to Tiffany Wilding, a Pimco economist focusing on the U.S, whose article appeared in the Market Watch, “While the data are noisy, and it’s risky to draw conclusions from one set of reports, we believe they may reflect some trends ­­worth watching — chief among them rising capacity constraints and growing inflationary pressures.”

She points to some other factors behind the wild ride that are worth sharing here. (1) Real productivity growth was surprisingly weak in the fourth quarter 2017 (down 0.1% from the prior quarter on a seasonally adjusted annual rate basis), and unit labor costs accelerated to 2.0% despite some moderation in real compensation growth. (2) The headline ISM Manufacturing Index moderated less than expected due to slowing supplier deliveries, while the production, new orders and employment indexes each declined. Meanwhile, the prices paid index increased to the highest level since 2011. (3) Labor market aggregate hours, which correlate with real economic output, declined 0.42% month-over-month in January, while average hourly earnings gained 0.3% month-over-month and rose 2.9% year-over-year — the highest rate since 2009.

“These data come at a time when unemployment is below various estimates of the non-accelerating inflation rate of unemployment (NAIRU), broader measures of labor market underutilization are close to pre-crisis levels and payroll growth appears to have peaked for this cycle and is decelerating,” Wilding writes.

What is the takeaway from all of this? According to Wilding, “The U.S. is starting to look more like an economy that is in the later stages of its business cycle. Absent a pickup in productivity growth, slowing payroll growth and rising economic capacity constraints should coincide with a gradual deceleration in real economic activity and building inflationary pressures. Along these lines, the weak labor productivity report released last week may raise questions about whether and to what extent productivity will rise over the coming year in response to fiscal expansion.”

It is interesting to note that while much blame has been put on the increase in hourly wage rate, which is only 2.9 percent, wages are growing barely faster than the inflation rate. In real terms (i.e., adjusted for inflation), through December wages were up just 0.6% year-over-year, down from 2.4% in October 2015, and 3.2% in the mid-1990s.

According to Rex Nutting of the Market Watch, higher wage rates do not necessarily translate into inflation. Companies usually would raise prices when the fixed and variable costs are higher, and if they can afford to get away with it, but are usually forced to “eat” some or all of the increased costs, usually in the form of lower profits.

He opines that higher wages aren’t putting pressure on companies to raise prices. After all, unit labor costs increased only 0.2% in 2017, one of the lowest gains ever recorded at this point in an expansion. According to the Bureau of Labor Statistics’ employment cost index, private-industry wages rose only 0.5% (after adjusting for price changes) in the past year.

So, it is the fear of losing profit in stock funds and not higher wages that may be at the core of why Dow tumbled.

As a matter of fact, U.S. workers have been losing bargaining power for decades, and the result is income stagnation for almost everybody except the fortunate few. Real median household incomes (adjusted for price changes) and real median weekly wages have barely budged since 2000. 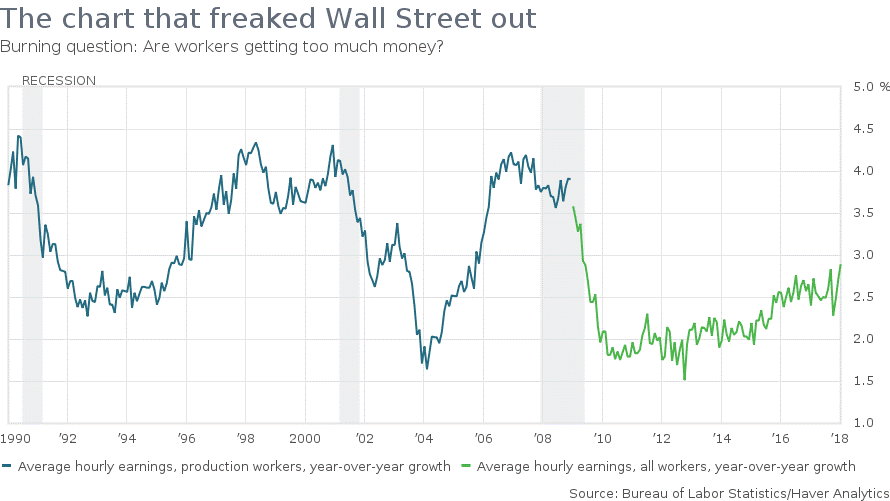 In the 50 years between 1950 and 2000, workers received about 62% of total national income as compensation, but, as profits surged in this millennium, the workers’ share has fallen to around 56%. “That may not sound like much of a change,” Nutting opines, “but the decline in bargaining power means that workers have lost out on nearly $10 trillion in income over the past 17 years compared with what they would have received if their share of the ever-growing pie had remained constant.”

If the investors care about the growth of the American economy, they ought to share the American pie with low wage earners by increasing their wages fairly, and should not be freaked out with a 9-cent an hour wage raise. On the other hand, if they let fear and robots to dictate and feed their greed then, surely, they haven’t seen the worst yet.

Finally, on a more serious note, as long as we live in a world of interest and paper money, away from dinar (gold) and dirham (silver), sadly, when it can be printed at the whim of a central bank or a government and not dictated by production of commodities, goods and services that others require, inflation will remain an untamed beast that would surely eat away our share of the pie. Something to ponder about!