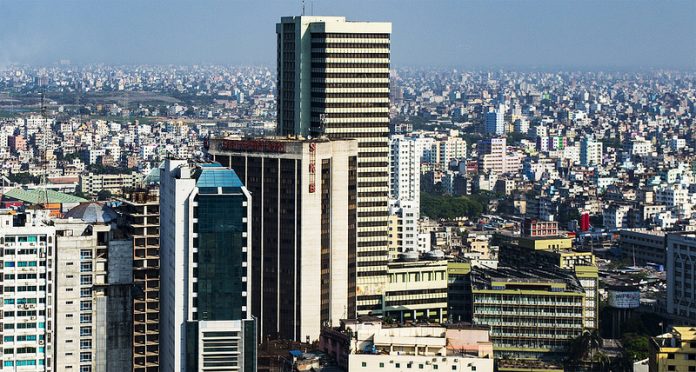 Bangladesh had her parliamentary election on December 30, 2018, in which prime minister Sheikh Hasina’s ruling alliance won a third straight term winning more than 90 percent of the 300 seats contested. Five candidates of the BNP and two candidates from its ally Gono Forum were elected, while the ruling Awami League and its close allies bagged 267. The Jatiya Party, an ally of the Awami League, came second with 20 seats. [An additional 50 seats are reserved for women that will be distributed based on the proportional vote share of the contesting parties.]

Sunday’s election was marred by accusations of ballot stuffing, voter intimidation and violence that killed at least 19 people. Allegedly, most polling centers did not have observers from the opposition parties thus allowing for colossal ballot stuffing even in contested seats in which the opposition parties had little chance of winning. In some centers, poll results showed more votes being cast than the total eligible votes, giving credence to the opposition claims of a ‘farcical election’ with massive vote rigging.

As has become quite routine in the aftermath of any election held in Bangladesh (since 1991), the opponents rejected the election outcome. Their seven elected reps did not take the oath of office on Thursday, Jan. 3.

Western governments, including the United States and the European Union, have condemned the election-day violence and called for an investigation into a range of irregularities. The international media and rights group showed evidence of vote rigging and asked for a review of such improprieties, a call that has been rejected by Sheikh Hasina. On Thursday, New York-based Human Rights Watch said the run-up to the vote was characterized by “violence and intimidation against the opposition … and the misuse of laws to limit free speech”. An earlier report, dated Dec. 22, had already described the pre-election atmosphere as “a climate of fear extending from prominent voices in society to ordinary citizens.” “International donors, the United Nations and friends of Bangladesh should remember that elections are about the rights of voters, not those in power,” Brad Adams, HRW’s Asia director, said in a statement.

Last Friday, January 4, 2019, the United Nations joined the choir calling for an independent and impartial investigation into the election in Bangladesh.

“We urge the authorities to carry out prompt, independent, impartial and effective investigations into all alleged acts of violence and human rights violations related to the elections, with a view to holding accountable those responsible, regardless of their political affiliations,” the United Nations said. “There are worrying indications that reprisals have continued to take place, notably against the political opposition, including physical attacks and ill-treatment, arbitrary arrests, harassment, disappearances and filing of criminal cases.” “Reports suggest that violent attacks and intimidation,” the United Nations said, “have been disproportionately carried out by ruling party activists, at times with complicity or involvement of law enforcement officers.”

The United Nations called on the authorities to take urgent measures to prevent further reprisals, and to ensure that law enforcement authorities exercised their powers in accordance with the rule of law. It also urged the National Human Rights Commission to play an independent and proactive role.

The Electronic Voting Machines were first used in this election in six constituencies, which also came under criticism due to the irregularities and polling officers voting on behalf of the voters and in favor of the ruling government. According to the Wikipedia, “In summary, it was the most controversial election in the history of the country characterized by the widespread vote rigging by ruling party activists with the assistance of police, presiding officers and all state powers.”

This is a sad commentary! Before the election there was some optimism in the air that this time with the participation of opposition BNP (which sat out the previous general election over its unmet demand for poll-time neutral, i.e., care-taker, government) and the Jatiya Oikya Front (Gono Forum) the election would be fair, thus allowing democracy to take a deeper root in this country of nearly 160 million people. Apparently, all such hoopla came to nothing. Bangladesh will have to live through its ignominy of being an illiberal democracy for a foreseeable future!

After all, for democracy to benefit the people, the government must be a participative one of the people, by the people and for the people with checks and balances in place. Democracy cannot blossom when there is no opposition or a tyranny of the majority that tramples on the rights and privileges of the minority.

Bangladesh is, thus, back to square one, and what we witnessed in the last election was almost a repeat of the previous election results, which does not bode well for the country and its people.

Did the ruling party need such vote rigging to win the 2018 election? I didn’t think so. Despite many flaws, including burgeoning corruption and politicization of all the wings of the administration, the ruling alliance has had many positives that it could have banked upon to cement its win in a fair election, even if held under a caretaker government.

Last month, I had the opportunity of attending a meeting of the US-settled non-resident Bangladeshi – (NRB) born engineers in the Washington D.C. area that was organized by the NRB Council, USA. A video about the progress that Bangladesh has made within the last few years, esp., in gender equality and economic growth was shown. During nearly 10 years of Hasina’s governance, per capita income has increased by nearly 150 percent, while the share of the population living in extreme poverty has shrunk to about 9 percent from 19 percent, according to the World Bank. Some experts suggest that at the current rate of nearly 8 percent growth, Bangladesh would cross the per capita income of India, by 2020, and is expected to turn into a middle-income economy by 2024. It’s an impressive list that should make anyone proud of being a Bangladeshi. I wondered: where would Bangladesh be today if there was no corruption!

So, why this charade with the election? I am told that the ruling alliance did not want to take any chance and ended up re-engineering the entire process, thus, tarnishing the image of Sheikh Hasina internationally. With the goodwill, she had created globally, esp. in the aftermath of Rohingya genocide, and the phenomenal scorecard of achievement within the country, surely, she did not need foul plays of her either too-enthusiastic or criminal and rowdy supporters within the ruling party to solidify her election win in 2018.

As a well-wisher, my advice would be that Prime Minister Sheikh Hasina listen to the UN and carry out prompt, independent, impartial and effective investigations into all alleged acts of violence and human rights violations related to the elections, with a view to holding accountable those responsible. If foul plays are proven, new and fair elections should be held in those constituencies immediately to correct the previous wrongful acts. Such by-elections would go a long way to restoring people’s trust and salvaging her tarnished image from being perceived as an authoritarian who has turned Bangladesh into a de-facto one-party state, where the ruling party has usurped the constitutional rights of its opponents and common citizens. These measures would salvage democracy, which the country needs badly to encourage foreign investment, and attract NRBs and talented expatriates to fulfill her vision for a ‘prosperous Bangladesh with no one left behind’.

Now that the election is over, and Sheikh Hasina has been asked to form a new cabinet what is next for the opposition parties? Do they have a forward-looking strategy that is peaceful and non-violent?

The BNP chairperson Khaleda Zia (74) is in poor health and is serving time in prison after being convicted of embezzling funds during her time as prime minister. With many of the party leaders behind prison cells or facing trials, her party is in disarray. Her son, Tariq Zia, groomed for a leadership role, lives in the UK and risks prison time if he were to return to Bangladesh due to various court verdicts against him. If the party wants to be relevant in the future, it needs to develop a forward-looking strategy minus the Zia factor.

The Gono Forum leader, Dr. Kamal Hossain (81), is an old man, and so are most of the leaders of the opposition parties, including the Jatiya Party whose leader H. M. Ershad is ninety years old. All these major parties, including the ruling Awami League (whose leader Sheikh Hasina is 71 years old), need to bring younger generation in the leadership role by grooming individuals that are honest, moral, spiritual and intellectually sharp.

As the unprecedented, fourth-time Prime Minister, Sheikh Hasina may like to improve Bangladesh’s ranking in media freedom to strengthen this bedrock of democracy. Currently, the country is ranked 146 out of 180 countries, according to Reporters Without Borders (RSF). She may like to remove the draconian Digital Security Act (DSA) that has been accused of spreading a climate of fear. The sooner the better!

In the summer of 1992, Sheikh Hasina, then the leader of opposition in the parliament, attended the Democratic Party Convention in New York City. Accompanied by my wife (Eva) and infant (Hassan), I spent half an hour with her at her hotel room in the Trump Plaza Hotel. We found her to be loving, caring and sincere. I pray and hope that my perception is not wrong and that she has the moral fortitude and intellectual foresight of doing what is right towards strengthening democracy and making Bangladesh envy of South Asia by bettering the lives of all the citizens.