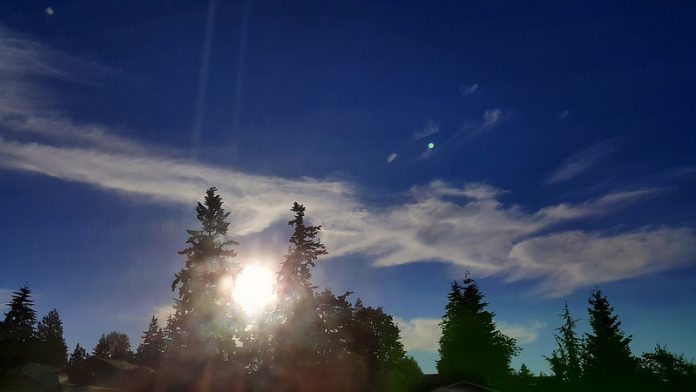 This is Armageddon Summer in the northern hemisphere: out-of-control wildfires all around the Arctic Circle (not to mention California and Greece), weeks-long heatwaves with unprecedented high temperatures, torrential downpours and Biblical floods. And yes, it’s climate change.

It’s quite appropriate to be frightened, because the summers will be much worse ten years from now, and much worse again ten years after that. Prompt and drastic cuts in greenhouse gas emissions now might stop the summers of the 2040s from being even worse, but they wouldn’t do much to lessen the mounting misery of the next 20 years. Those emissions are mostly in the atmosphere already.

Besides, we’re not going to see ‘prompt and drastic cuts in greenhouse emissions’ any time soon. It’s going to get a lot worse before it gets better – if it ever does get better. And so it is probably time to ask the obvious question: where will it all end?

The worst case isn’t the only case, or even the most likely case, but there may be some value in understanding how bad it could get if we miss all the exits on the highway to Hell. And here I’m going to quote from an interview I did ten years ago with Dr. Dennis Bushnell, the chief scientist at NASA’s Langley Research Center. It’s all still true today.

He had been talking about the ‘feedbacks’ (melting permafrost, warming oceans, huge releases of methane and carbon dioxide). Because they cannot yet be fully incorporated into the computer models of climate, they lead to systematic underestimates of future warming. And then he cut to the chase.

“If you take all these feedbacks into account, the estimates are that by 2100, instead of two to six degrees Celsius rise (in average global temperature), it looks like a possibility of six to twelve degrees….

These temperature changes would change the ocean circulation patterns and end up with much of the oceans going anoxic – very low oxygen content – which would then promote bacteria which produce hydrogen sulfates. These would rise and take out the ozone layer, and also make it somewhat difficult to breathe. This is by 2100.”

What Dennis Bushnell was referring to was ‘Canfield oceans’, now strongly suspected of being the cause of four out of the big five mass extinctions. Everybody knows about the huge asteroid that struck the Gulf of Mexico 65 million years ago and wiped out the dinosaurs. Fewer people know that there is no trace of an asteroid strike associated with the other four ‘great dyings’, 444 million, 360 million, 251 million and 200 million years ago. So what happened then?

One common factor was that the planet was unusually hot at the time, but the real clue was that the deep oceans were anoxic. There was no oxygen down there, and therefore no life that used oxygen. When the oceans are very warm, the ‘overturning circulation’ (like the Gulf Stream) that carries vast amounts of oxygen-rich surface water down into the depths simply stops, and the oceans stratify into an oxygenated surface layer and an anoxic deeper layer.

But there was still life down there: sulfate bacteria that normally hide in the silt, away from the oxygen that would destroy them. In an anoxic ocean, they come out and multiply – and eventually, if the conditions are right, they rise all the way to the surface and kill all the oxygen-based life in the sea.

Not only that, but hydrogen sulfide gas, a waste product of their metabolism, rises into the atmosphere, destroys the ozone layer, and drifts over the land where it also wipes out most life. This has happened not once but at least four times in the past.

In theory, by warming the planet we would be creating the right conditions for another go-round, but in practice, it’s not all that likely. There hasn’t been a ‘Canfield’ event in the past 200 million years, and when those earlier mass extinctions happened the planet was a good deal hotter to begin with.

Even if we avoid that fate, we may be heading for a mass die-back, including of human beings. Food is the key issue: as warming depresses productivity and turns whole regions into a desert, mass starvation is imaginable, although actual extinction seems improbable.

It’s also still possible that we will react fast enough to stop well short of mass death. When dealing with the future, you can only deal in probabilities, and even those are very slippery.

The situation is already quite grim. Bad news, of course, but when you find yourself in a high-stakes game you should know what the stakes are.