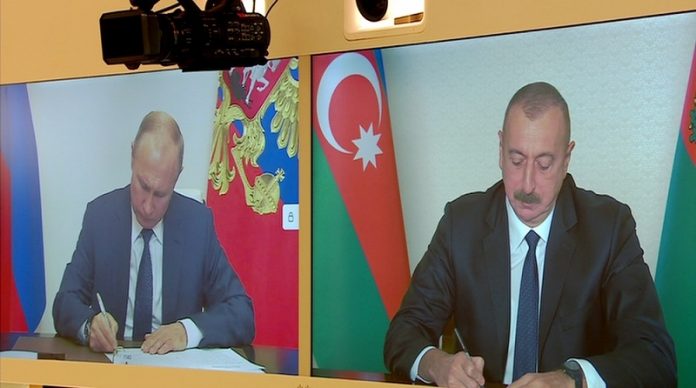 Armenian Prime Minister Nikol Pashinian announced on Monday night that he has “painfully” signed an agreement with the leaders of Azerbaijan and Russia to end the war with Azerbaijan. “I have signed a statement with the presidents of Russia and Azerbaijan on the termination of the Karabakh war,” Pashinyan said in a statement.

Pashinian’s virtual surrender to Azerbaijan sparked violent demonstrations in Armenia Tuesday. Chaotic scenes erupted inside Armenia’s parliament as protesters angry at the Nagorno-Karabakh peace deal with Azerbaijan seized control of its chamber to denounce the country’s leadership as they lynched the parliament speaker.

Prime Minister Nikol Pashinian signed a virtual surrender agreement with Azerbaijan following repeated calls on Russia to help Armenia in its fighting with Azerbaijan over Nagorno-Karabakh.

In his letter to Putin, Pashinyan said hostilities were approaching Armenia’s borders, reiterated that Turkey was backing Baku, and invoked a 1997 treaty on friendship, cooperation, and mutual assistance between Moscow and Yerevan. “The prime minister of Armenia has asked the Russian president to begin urgent consultations with the aim of determining the kind and amount of aid which the Russian Federation can provide Armenia to ensure its security,” the foreign ministry said.

Armenia hosts a Russian military base under a 25-year agreement.

The Russian response was that it would provide “necessary assistance” to Yerevan in case the fighting reaches the Armenian territory. “Russia will render Yerevan all necessary assistance if clashes take place directly on the territory of Armenia,” the foreign ministry said in a statement.

Tellingly, on October 7, in an interview with the Russian public broadcaster Russia 24, President Putin reaffirmed Russia’s commitment within the Collective Security Treaty Organization, or CSTO, which envisages that an attack on one member state is considered an attack on all others, and each is obliged to support their fellow members.

Around 20 percent territory of Azerbaijan is under Armenian occupation since 1994 when the first Nagorno-Karabakh fighting ended with a devastating defeat for Azerbaijan.

Now the question is why the Russian President allowed the fighting to continue as Armenia suffered heavy losses? Why he did not invoke CSTO to help Armenia?

Interestingly, in the past, Armenia had repeatedly stated that it would expect direct military assistance from the CSTO in case war with Azerbaijan resumes. In August 2009, Nikolay Bordyuzha, the CSTO’s secretary-general, confirmed that official Yeveran can count on such support.

However, many analysts believe, Putin perhaps wanted to punish Armenia for its pro-US and pro-NATO policies.

Armenia contributes to NATO-led operations and cooperates with Allies and other partner countries in many other areas. A key priority for NATO is to strengthen political dialogue and to provide focused advice and assistance in support of democratic, institutional, and defense reform efforts in Armenia.

The United States has been steadily upping its military clout in the region. In early 2003, the United States Department of Defense announced several major military programs in the Caucasus. Washington’s military aid to Armenia in 2005 amounted to $5 million, and in April 2004, the two sides signed a military-technical cooperation accord.

In late 2004, Armenia deployed a unit of 46 soldiers, which included bomb-disposal experts, doctors, and transport specialists, to Iraq as part of the American-led Multi-National Force Iraq. In 2005, the United States allocated $7 million to modernize the military communications of the Armenian Armed Forces.

Since 2003, Armenia and the Kansas National Guard have exchanged military delegations as part of a National Guard Bureau program to promote better relations between the United States and developing nations. [Wikipedia]

Hence this argument is perhaps plausible that Russia allowed the fighting continued till Armenia was unable to sustain it and accepted the ceasefire terms that are favorable to Azerbaijan.

The agreement allows Azerbaijan to keep areas of Nagorno-Karabakh it seized during the war and Armenia agreed to leave several other areas in the next few weeks.

Armenia must return several territories under its control, including parts of the Gazakh region by Agdam and Gazakh regions by November 20, the Kelbajar region by November 15, and the Lachin region by December 1. Both sides must also guarantee the unimpeded, safe flow of traffic through established corridors through Azerbaijan to Lachin and through Armenia to the Nakhchivan exclave bordering Turkey and Iran.

According to the agreement some 1,960 Russian personnel equipped with small arms, 90 armored personnel carriers, 380 units of vehicles, and special equipment would be deployed along the Nagorno-Karabakh frontlines and the Lachin corridor for a mandate of five years, with an automatic five-year extension if neither party decided otherwise six months before the expiration date.