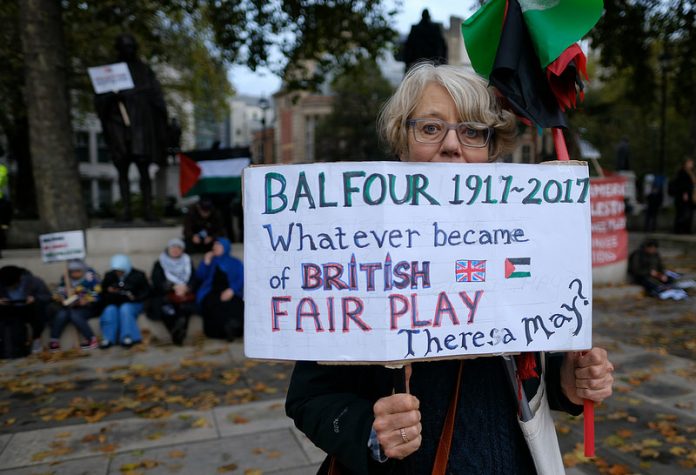 Zionism is a colonial movement invented in the 19th century to transform a multi-religious Palestine to the apartheid “Jewish state of Israel”. It was to be “a rampart of Europe against Asia, an outpost of civilization against barbarism” (Herzl in the Jews’ State). This colonial racist idea remained unchanged since the founding of the “Jewish Colonization Association” in 1891 and the World Zionist Congress in 1897. Like all colonial movements, it focuses on the dual task of destroying native life and creating new exclusivist racist regimes and it gets support from empires and from complicity.

Britain put the Al-Saud family in charge of the area of Hijaz (which was to become the kleptocracy of “Saudi Arabia”). Abdul Aziz Al-Saud responded in 1915 to British requests by writing in his own hand: “I the Sultan Abdel Aziz Bin Abdel Alrahman Al-Faysal Al-Saud decide and acknowledge a thousand times to Sir Percy Cox the representative of Great Britain that I have no objection to give Palestine to the poor Jews or to others as seen [fit] by Britain that I would not go outside [disobey] its opinion until the hour of calling [end of the world].” The good relations at the expense of Palestinians by the Saud ruling family remained to this day with a brief period when Arab nationalism was strong and the Royal family suspended oil shipments to the US in the October 1973 war.

The Palestine Liberation Organization (PLO) began its long process of “compromise” with colonizers in 1974. Israel then signed a “peace treaty” with Egypt in and had good working relations including cooperation in crimes against humanity in isolating and besieging the Gaza strip. There was a brief period when Morsi was elected President of Egypt when there was the potential of relieving the blockade but that soon ended when the military retook power in Egypt. Egypt is, however, trying to play a role in mediation between Hamas and Fatah now which could help end the blockade and may help reclaim a liberation struggle.

Israel has maintained efforts to break-up the (already fragmented) Arab world for example in developing proxy militias and aligning with extremist right-wing Christian leaders in Lebanon in the 1970s and 1980s. Working through proxies or directly, Israel and its Arab stooges committed massacres such as at Sabra and Shatila refugee camps in Lebanon in 1982. “Israel” maintained good relations with separatist movements in Northern Iraq and in South Sudan and helped arm the South Sudanese army. Israel’s relationship to Barazani and attempts to break-up Iraq is now well known. In the 1990s at the behest of the Israel lobby, Iraq was subjected to sanctions led by the US and Arab regimes that resulted in the death of one million Iraqis half of them, children. At the same behest, the US attacked Afghanistan, Iraq, and Yemen (see here).

In 1986, King Hassan II of Morocco invited the Israeli Prime Minister for talks and following the Oslo disastrous accords, Morocco accelerated its economic ties and political contacts with Israel opening of bilateral liaison offices in 1994. As the late Edward Said showed eloquently that the Oslo Accords were a second Nakba for the Palestinian creating a Palestinian authority whose task was designated as protecting the occupiers from resistance and normalizing the occupation. After Yasser Arafat and Mahmoud Abbas signed these surrender treaties, Israel’s economy and its foreign recognition grew rapidly. The agreements also gave the occupying power the green light to grow its illegal activities in the occupied areas not turned over to the Palestinian authority (area C is the majority of the land).

Economic relations existed between Qatar and “Israel” between 1996 and 2000. In 2005, Saudi Arabia announced the end of its ban on Israeli goods and services. Diplomatic and other ties between Tunisia and Israel fluctuated between strong ones in the 1990s to weaker ones during 2000-2005 to pick up again until the Tunisian revolution. In 1919 King Faisal Al-Hussain (Hashemite leader) signed an agreement with Zionist leader Chaim Weizmann but one of his sons was later removed (by France) from power in Syria because of his opposition to Zionism. Israel signed a “peace treaty” with Jordan in 1994. However public sentiment in Jordan (among Jordanians of Palestinian or of Trans-Jordan heritage) remains strongly opposed to normalization efforts including in saddling Jordan with huge debts that serve Israeli interests (e.g. of the Red Sea-Dead Sea canal).

The CIA and the British intelligence services toppled the elected Mohammad Mosaddegh government in Iran in 1953 to bring a more Israel friendly regime. This lasted until the Iranian revolution ended the Pahlavi criminal regime in 1979. Israel had good working and cooperation with Turkey from 1949 to 2011 when Israeli leaders engaged in a series of affronts and blunders including murdering Turkish citizens on the Mavi Marmara ship in International waters.

In 2015 Israel opened a diplomatic mission with the United Arab Emirates (UAE) and has helped Saudi Arabia and the UAE launch the war on Yemen in order to control the strategic Bab-el-Mandeb strait (Red Sea to Indian Ocean). Egypt has also agreed to give two of its Islands in the Strait of Tiran to Saudi Arabia on Israel’s behest.

The above is only the tip of the iceberg in terms of Zionist collusion with Arab leaders to destroy Palestine. Much remains hidden. Yet, understanding this history helps understand why rulers of “Saudi Arabia” and the UAE and others are colluding with Israel and the USA in a feverish attack on resistance forces in the Arab and Islamic world. While such collusion with colonialism is common in all parts of the world, the collaborators fail to read history to understand the fate of all tools of colonialism. They will face the same fate as other collaborators. As tools of colonialism, they are discarded as soon as they fulfil their designated roles.

Much of the developments after 1973 would not have happened had the PLO remained true to its principles. This is indeed a historic moment in our part of the world. Zionists feel emboldened like never before and intend on ending the Palestine question once and for all with collusion especially the key issue of refugees (would be forced to settle outside of Palestine). Developments in Saudi Arabia, UAE, Syria, Iraq, Lebanon, Yemen, and the rest of our region need to be watched in the context of this struggle and with the centrality of the issue of Palestine since it is the reason for all this. It is a struggle between those who think they can guarantee their thrones and positions by dong Zionist bidding and those who challenge colonialism. The choice is between mayhem that will spare no one (including those who collaborate) or rejection of division and then unity to fight imperialism, colonialism, and Zionism. Palestine remains the litmus test, the Achille’s heel of imperialism, and the key to peace. Each of us should take a clear stand. I am optimistic because 12.7 million Palestinians and hundreds of millions of others who follow their conscience will not let Zionism (and its complicit Arab and American rulers) liquidate the most just cause in human history. It is wise of complicity leaders to rethink their positions if for nothing else than for their own interests since colonial powers use tools and discard them and are never true to their words to those that do not belong to their “tribe”. This is amply illustrated with history of Israel itself and its collaborators (e.g. in Lebanon in the 1980s). Now we need to all work together towards a peace with justice, the inevitable outcome.