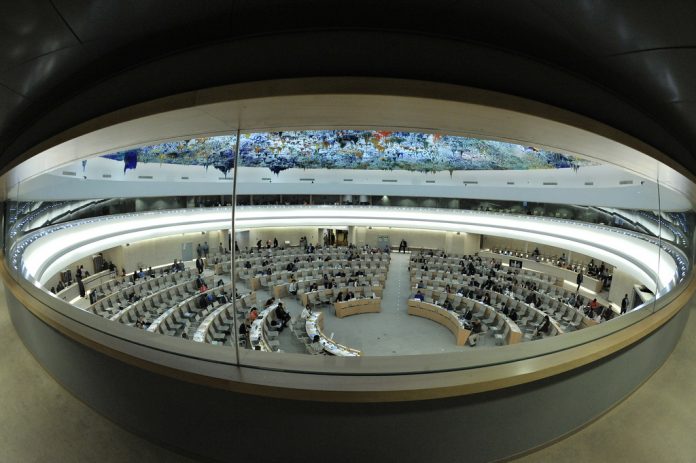 “Unconscionable” approach to Israel, claims the Trump administration as it unceremoniously exits from the United Nations Human Rights Council, UNHRC.

Using the excuse that the UNHRC is biased against Israel, the United States has without blinking an eye and in typical cowardly fashion, announced its withdrawal, hoping that other states will follow in its footsteps.

Thus far it appears that the United States is on its own except for Israel.

Being at loggerheads with an important structure of the world body may be music to the ears of Israel, but it certainly does not augur well for whatever is left of the “prestige” of the world’s only superpower.

Flexing its muscles to protect the world’s last remaining settler colonial regime, may have worked in the past. That era has passed, thanks mainly to the overt shameful collusion between Trump and Netanyahu to impose an Israeli narrative of “victimhood” on the rest of the world.

The new reality is that the people of the world had enough of US/Israeli bullying and intimidation – even if some governments are still in awe of American power.

Worse for the United States is that its incumbent president is viewed as an unpredictable character, whose claim to legitimacy is mired in controversy. Donald Trump is regarded as a buffoon, surrounded by a circle of rightwing racists, who profit from his disastrous and irrational policies.

More importantly, having an arrogant fire-spewing loud mouth Nikki Haley as his ambassador at the UN, the contrast between good and evil could not be starker. In her shrill voice, Haley attacked the UNHRC as “hypocritical and self-serving”.

Without any regard for the hypocrisy of her own government, Trump’s envoy, who is viewed as serving Israel’s interest rather than America’s, may believe in her own lies. Unfortunately for Haley and her Zionist patrons, a large proportion of global opinion is inclined to believe that the Trump administration has failed to halt Israel’s war crimes against Palestinians.

Failure apart, it has deliberately sabotaged attempts by the UNHRC to hold Israel to account. Shameless double standards continue to characterize Trump’s presidency especially in the emphatic fashion it shields Israel.

As global outrage against Israel’s horrific bloodbath in Gaza grows, there cannot be any doubt that the settler colonial regime is as fearful as the former South African apartheid regime was about the potential impact of the United Nations.

It is well known and documented that the UN had a significant role in the abolition of South Africa’s notorious apartheid rule. Condemned as a “crime against humanity”, the UN established a Special Committee against Apartheid in 1962. A decade later it adopted the International Convention on the Suppression and Punishment of the Crime of Apartheid.

Nelson Mandela as the newly elected President of South Africa addressed the UN General Assembly in 1994 by welcoming its role in the vanquishing of apartheid.

Israel obviously fearful of a similar scenario where leaders of the freedom struggle would retrace and repeat Mandela’s celebratory speech, is keen to have Trump act as its proxy to destroy or at the least cripple the UN and key institutions such as the UNHRC.

It is for this reason that the Netanyahu regime has sought to ridicule and slander Special Rapporteurs and Working Groups whose task to investigate and intervene violations have been made impossible.

Israel is aware too that its conduct against Palestinians especially in the emphatic fashion its racist laws are being applied, is at odds with the charter of the UN. An intolerable cruelty which no organ of the UN can justify or ignore.

It is not surprising that South Africa has slammed the decision of the US to withdraw its membership of the UNHRC. The ANC-led government has correctly deplored the exit as “worrisome” and against the spirit of multilateralism and the Charter of the UN.

As is known, a chorus of rights groups have consistently argued that the UN has not done enough to punish Israel for its myriad of violations of International Law. Discontentment with UN’s lack-luster performance may be a polite way to express displeasure.

A critique shared by Palestinians who justifiably argue that the endless list of crimes committed by Israel against them – all in violation of the UN Charter – have not resulted in swift decisive action.

Notwithstanding comprehensive reports by Special Rapporteurs and Working Groups, it is an undeniable fact that Israel has evaded censure and concomitant punishment, due mainly to the protection offered by the US. Not only has it impacted negatively on the image of the UN, the question of Israel’s impunity and defiance has undermined the credibility of its institutions.

Now that Trump has led America’s departure amidst bellicose warcries by Haley, will we see the UNHRC rebuilding its muscles?