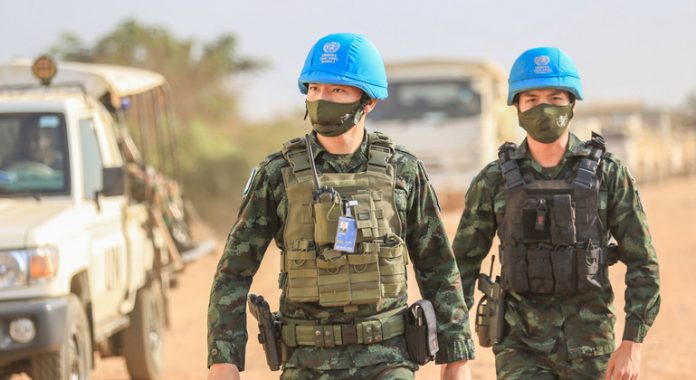 Since 2018, the Royal Thai Armed Forces has deployed troops serving as the Horizontal Military Engineering Company (HMEC) to support UNMISS.

Nearly 270 Thai peacekeepers are working mainly in two South Sudanese cities, the, capital, Juba, and Rumbek the latter being about 400 km to the north where they help to maintain supply routes, including engineering tasks, with the UNMISS Engineering Section.

For instance, in 2019, Thai engineers serving with UNMISS repaired a section along the frequently travelled Juba-Yei road. Most of the main supply routes in South Sudan are in constant need of repair, and convoys to different parts of the country often suffer delays or damage – making transportation, access and delivery of humanitarian assistance a herculean task.

In an interview, Lt. Col. Kaisin Sasunee, the current Contingent Commander of Thai HMEC, said that while he was very proud of his unit’s work on roadway maintenance and repair, he was equally proud of HMEC’s agricultural demonstration plots at the Yei Checkpoint Juba, part of an effort to teach residents of the three surrounding communities how to grow food and become more self-sufficient.

He said it was very rewarding to support local communities, to help improve their situations and pass on a little bit of his culture.

“My unit has a warm relationship with locals [in South Sudan], due to the warmth of the Thai people. When we meet someone, we greet them with smiles and raise our hands, which is typical in Thai culture. This has helped the local people welcome us,” the Lt. Col. said.

Q: Why did you decide to join your country’s armed forces?

A: Lt. Col. Kaisin Sasunee: I am the Contingent Commander of Thai HMEC rotation 2. The reason that I decided to join the Royal Thai Armed Forces is that by joining [these Forces] I can repay my nation … protect the Monarchy and support people, following the Armed Forces motto: ‘for the Nation, Religion, Monarchy and People.’

Q: How did you come to be a UN peacekeeper? Is this your first mission?

Thai engineers have made an invaluable contribution to the mandate of the UN Mission in South Sudan by increasing access for local communities to healthcare, boosting trade and enabling people from remote locations to forge connections with each other as the world’s youngest nation works towards consolidating a durable peace.

Q: What are some of the challenges your contingent has faced. What has been the impact of COVID-19 on your work and the world of your troops? How have you been adjusting?

A: Lt. Col. Kaisin Sasunee: My unit has faced challenges such as differences in topography, climate, nationality, religion, language and culture. My unit operates maintenance on the main supply route, which is far away from the Thai HMEC base. Some of the areas of operation are still in conflict areas, and there is the possibility that some of my troops can be harmed. I’m always concerned with the safety of my personnel.

Also, the COVID-19 pandemic has impacted my unit’s work, especially in coordinating with other organizations. Still, my troops and I have been able to adjust to the situation. I have told my troops to comply with the Thai Army’s personnel protection measures, as well as the guidelines for COVID-19 prevention, which UNMISS has put in place. I’ve allowed my troops to participate in some activities that can help them relax, such as religious activities, growing plants and playing music and sports.

Q: Have you provided any support to the population or authorities with regard to the response to COVID-19 crisis?

A: Lt. Col. Kaisin Sasunee: In support of the COVID-19 response, my unit donated medical equipment such as surgical masks and hand sanitizer to Samson Nursery School, Exodus Academy, Lanya Health Care Center and other organizations, to help raise their awareness about prevention.

UNMISS has a base not far from Exodus Academy, a small school in Juba, South Sudan. In past years, peacekeepers have gone beyond their mandate to support the school. Most recently, the mission’s engineers from Thailand have helped to build a new classroom.

Q: What has been the most rewarding time at UNMISS for you personally?

A: Lt. Col. Kaisin Sasunee: Most rewarding for me at this mission have been the times that my unit has had the opportunity to support local communities by donating medical equipment.  Another rewarding time was when my Unit was able to highlight King Rama IX’s [Bhumibol Adulyadej, the Thai Monarch who passed away in 2016] ‘sufficiency economy philosophy’ and disseminate it to UNMISS and the South Sudanese people. I want people to be self-reliant. We are very proud of the Agriculture Demonstration Plots Project that we carried out with the Yei Police Station. It’s also rewarding when my troops complete their assigned missions safely.

Q: What are your responsibilities at UNMISS? What is your typical day like?

A: Lt. Col. Kaisin Sasunee: I am in charge of the command and control of my unit, and I ensure the good conduct of my troops according to our mandate and standard operating procedures (SOP).

Q: Do you have a message for any of your compatriots who might want to join UN Peacekeeping?

A: Lt. Col. Kaisin Sasunee: The message that I’d like to pass on to my compatriots is that we must work with international organizations. Therefore, you should prepare mentally and physically so you can be ready to face any situation. When you join a mission, the important thing to keep in mind is how you can help support the host country and local people.

I would suggest that my compatriot’s look to King Rama IX’s advice: ‘Understand’ the tradition and culture of the host country, as well as your role in the mission; ‘Reach out’ so that you can have good relations with others; and ‘Develop’ your knowledge so that you can adapt to your mission effectively.