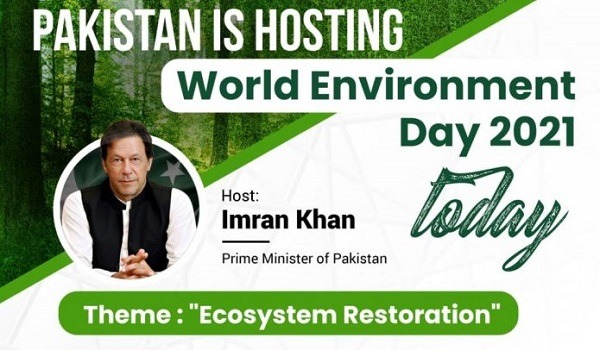 Islamabad (UNA-OIC) – Global leaders on Saturday appreciated Pakistani Prime Minister Imran Khan’s leading role in showing the world that through devotion and commitment, the tides of global warming and climate change could be reversed.

World Environment Day event was hosted by Pakistan, in which the world leaders dilated upon myriad challenges faced by humanity alike, including rising temperatures, deforestation, melting of glaciers, carbon emissions and water scarcity.

The leaders commemorated efforts of the Pakistani nation led by Prime Minister Imran Khan to tackle environmental impacts with a number of mega initiatives and by achieving a target of planting one billion trees out of Ten Billion Tree Tsunami.

Chinese President Xi Jinping, in his message read out by the Chinese ambassador, said “China commends Pakistan’s commitment (to ecosystem restoration), and stands ready to work with Pakistan and the rest of international community to step up cooperation within the UN framework…”

Noting the significance of UN Decade on Ecosystem Restoration, President Xi said the thematic activities held by Pakistan were of great importance.

While British Prime Minister Boris Johnson in his virtual message said “I salute what Prime Minister Imran Khan has done in promising to plant 10 billion trees (in Pakistan).”

Executive Director of the United Nations Environment Program (UNEP) Inger Andersen said the UN Ecosystem Restoration Decade was aimed at reversing the damages caused by the world to the environment.

“Pakistan is showing us a way. Prime Minister Imran Khan recently planted one billionth tree of Ten Billion Tree Tsunami. Bravo to all,” she remarked.

Congratulating Pakistan, he said with these nature positive measures, Pakistan was showing to the world that ‘it is possible to combine objectives of livelihood, resilience and ecological health’.