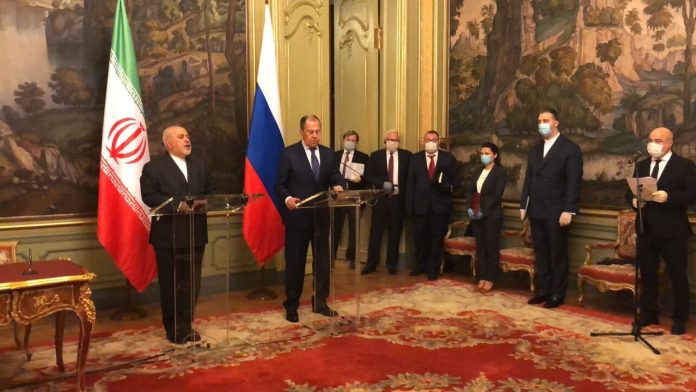 Speaking at a joint press conference with his Russian counterpart Sergei Lavrov, Zarif said Trump’s Administration’s job is pulling out of the international organizations and treaties.

We will not let Iran be subject to investigation the documents of which are based on spying claims, he noted.

Top Iranian diplomat said it will be regretful for the UN Secretariat and the IAEA if they tend to move in line with killing the JCPOA.

Zarif referred to his agreement with Lavrov on holding Astana trilateral meeting.

Heads of Iran, Russia and Turkey will hold Astana talks in through webinar, he said.

He noted that he invited Lavrov to visit Iran.

Stressing close cooperation between Iran and Russia with regard to regional cooperation, Iranian top diplomat said.

Through Astana talks three countries could solve crisis in Syria, he added.

Iran, Russia and Turkey are committed to Astana principles, he reiterated.

He noted the Western countries even did not try to help Syrians in coronavirus era.

Elsewhere in his remarks, Zarif referred to Iran’s and Russia’s common stance with regard to Afghanistan issue, saying Iran welcomes Russia efforts for solving problems in Afghanistan.

We also discussed issues related to Libya and Yemen, he added.

Elsewhere in his remarks, Zarif said even COVID19 could not create obstacle for Iran and Russia to develop cooperation.

Iranian foreign minister appreciated the efforts made by Russia to prevent JCPOA collapse.

He thanked Lavrov for his letter to UN chief on JCPOA and the measures taken by Sergei Ryabkov and other Russian ambassadors in Vienna and New York aiming to prevent disaster regarding JCPOA.

Elaborating on Iran-Russia-Azerbaijan cooperation, Zarif said the trilateral summit will be held if the situation is ready.

Zarif noted that the US spares no efforts to destabilize Syria and the region.

The US policies are now based on pulling out of international agreements, he said referring US’ withdrawal from Treaty on Open Skies, JCPOA, UNESCO and Paris agreement.