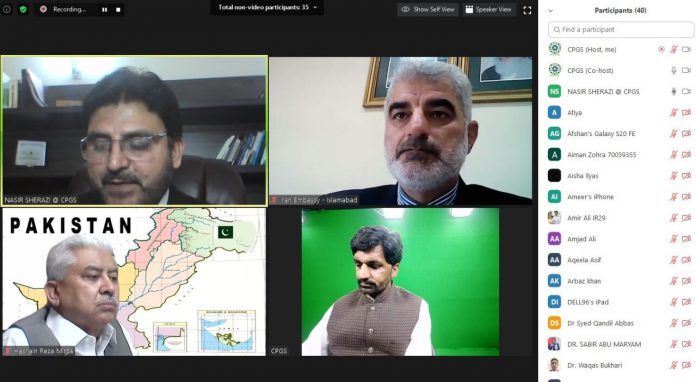 Mohammad Sorkhabi was speaking at a webinar titled ‘Future of Palestine in context of recent regional and global developments’ organized by Centre for Pakistan and Gulf Studies (CPGS) participated by researchers, academics and religious figures.

The diplomat in his remarks said the founder of the Islamic Revolution of Iran, Imam Khomeini (R.A) designated the last Friday of holy month of Ramadan as “World Al-Quds Day” to promote solidarity between Muslims and all free people in the world in support of the legal and human rights of the Palestinian people.

“Thus, the liberation of Holy Quds was introduced as a sacred goal for all Muslims,” he said.

He said on the one hand, the oppressed people of Palestine, whose sovereignty over their ancestral lands has been usurped and who have been systematically oppressed every day since 1967 and the formation of the fake Israeli regime.

He noted forced displacement, genocide, imprisonment, repression, house demolition, illegal confiscation of land, and tolerance of racial discrimination are just some of the disasters that the Palestinian people have endured all these years.

“On the other hand, there is the fictitious government and the usurping Zionist regime, which has been established as a crisis center in the Middle East by the British colonial government,” Sorkhabi said.

He said in the past few decades, the Zionist regime has played an important role in disrupting order and security in the region, violating the sovereignty of regional governments, especially Syria and Lebanon, and openly threatening countries in the region, including the Islamic Republic of Iran.

He said the role of the Zionist regime in supporting terrorist groups such as Daesh (the ISIS) is also significant. “The purpose of such actions is to destroy the current geopolitical order of the region and define a new political geography with small, weak and dependent Islamic countries so that there is no more resistance to the implementation of the Zionist expansionist plans,” he noted.

The diplomat said Israel pursues Institutional Discrimination and Systematic Oppression to achieve the goal of “preserving Israeli Jewish domination of the Palestinians”.

Mohammad Sorkhabi added the United States’ proposal for a solution to the Palestinian crisis, called the “Peace for Welfare”, known as the Deal of the Century, violates many fundamental principles of international law and international resolutions, including 242  (1967), 338 (1973), 2334 (2016).

“Trump’s alleged peace plan, known as the Deal of the Century, is a unilateral plan to support the maximum interests of the Zionist regime and ignore the minimum rights of the Palestinians,” he pointed out.

He added in order to resolve the Palestinian crisis, the Islamic Republic of Iran has presented a democratic and just plan entitled “Holding a national referendum in Palestine”, which has also been registered in the UN Secretariat.

Mohammad Sorkhabi said according to the Islamic Republic of Iran, the return of Palestinian refugees to their homeland and holding a referendum with the participation of the noble people of this land to determine the fate and type of political system is the most effective way to resolve this conflict.

“Under the plan, Palestinian Muslims, Jews and Christians will be able to choose their own legal system and enjoy their rights freely and equally.  The plan of the Islamic Republic of Iran has been formulated and presented on the basis of democratic principles and international law accepted by all governments and nations.  This plan is a good alternative to previous failed plans,” he said.

He said Zionist regime has failed in expansionist designs and they are struggling for their survival. “After the Islamic Revolution a new wave if resistance had started,” said the professor.

The researcher said recognition of Zionist regime by some Arab states has created more hatred against Tal Aviv in Muslim world.

He said there are 225 resolutions in the United Nations to solve the problem of Palestine but still they are suffering from Zionist atrocities.

“Palestinians must be given opportunity to return back to their homeland and those who were brought to this area from outside should leave this land. Only solution to Palestine is resistance which will definitely produce logical result,” he said.

General Secretary of Majlis Wahdat-e-Muslimeen (MWM) Raja Nasir Abbas Jafri said Zionist regime has become very weak and the Israel-US nexus is facing problem. “Their deal of the century has also failed. On the other hand Islamic Republic of Iran is becoming strong by each passing day,” said the religious leader.

He said Israel is going through different internal crisis there is political instability in Israel. “No doubt it is a failed state. Israel is afraid of dialogue among Muslim states as it wants to see division among Muslim world. Israel is on decline and soon would cease to exist and Al-Quds would be liberated,” said the MWM leader.

Dr Munawar Hussein, Professor at Quaid-e-Azam University said Palestine is a black spot on UN General Assembly and the international community has failed to force Zionist regime to behave properly.